Blog / Health Care / Female Condoms: How to Use, Advantages and Disadvantages

Female Condoms: How to Use, Advantages and Disadvantages

Female condoms are produced from light, soft, or weak synthetic latex. Femidom can be readily available at any clinic or any drugstore in the Philippines. You can also get online medicine delivery at your doorstep with a same-day delivery option, including contraception products.

What is a female condom?

The term female condom is also called an internal condom or vagina condom that provides a birth control/ contraceptive device that maintains a barrier to keep the female body away from sperm from entering the uterus. It helps to protect the female body against pregnancy and STDs.

Where to buy female condoms in the Philippines?

How to use a female condom correctly? 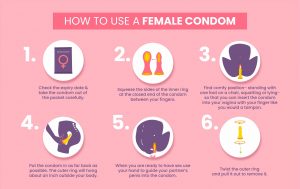 You can read the instructions on the label or leaflets. You can also follow the following step mentioned below or contact the sexual specialists to know more ideas.

Note: There are no female condom side effects that can be found. Researchers show that females can get rare side effects while using condoms.

If you are using lubricant

Birth control female condoms appear pre-lubricated to make them more natural to practice; however, you may additionally wish to practice extra lube. Examine the package to find out which lubricants are becoming.

What are the advantages and disadvantages of female condoms?

Here is a advantages and disadvantages table that lists:

What are the risks of using female condoms?

A female condom is reliable, but there are risks. Research studies have shown that 21 out of 100 women can become pregnant yearly while using female condoms.

Female condoms can easily be used with females; you can easily buy them at any online drugstore in the Philippines. If you get any side effects, symptoms, or any medical emergency, consult the specialists as soon as possible.

8 Tips to Maintain a Healthy Weight of Your Body

Be the first to comment on "Female Condoms: How to Use, Advantages and Disadvantages"